All is revealed in The Video

Think of No-Scalpel Vasectomy (NSV) as simply a way of ‘getting to’ the tubes via a single small hole in the middle.

There are two Vas Deferens, or simply ‘The Tubes.’ Sperm travel from each attached testicle towards the base of the bladder.

Each of the two tubes is divided, leaving two ends.

Fascia, sounding like ‘Fasha,’ is the strong thin layer of connective tissue that lies just outside of the tubes.

The fascia covers the stump of one end whilst the other end is left outside the fascia.

The lower end is left open. The end result of fascial interposition to the upper end.

WHAT IS NO-SCALPEL VASECTOMY?

No-Scalpel Vasectomy (NSV) is is a type of ‘minimally invasive’ vasectomy – the vasectomy version of keyhole surgery. NSV leaves a small 2-3mm hole at the front of the scrotum. No stitches are required, so you don’t have to come back for stitch removal. Minimal trauma to the tissue means that you can return to work and physical activities sooner. On the other hand, traditional vasectomy requires incisions and stitches on both sides of the sac.

Do we really need guidelines to confirm that vasectomy should effectively be gentle? Maybe not, but it’s comforting to know that The UK Vasectomy guideline (FSRH 2014) states that ‘a minimally invasive approach should be used to expose and isolate the Vas Deferens during vasectomy as this approach results in fewer early complications in comparison to other methods.’

NSV is also recommended above traditional vasectomy in The American Urological Association Vasectomy Guideline which specifically states in their amended 2015 guideline that ‘Minimally Invasive Vasectomy should be used for Vas Isolation.’ The European Association of Urology Guidelines on Vasectomy guideline (2012) adds to the consensus.

No-Scalpel Vasectomy a superior method of gaining access to The Vas Deferens. However, NSV is 20+ year-old technology. A crucial but surprisingly little known fact is that No-Scalpel Vasectomy (NSV) simply describes the way of getting to the tubes – no more, and no less.

HOW ARE THE TUBES BLOCKED?

Most Vasectomies these days are described as ‘No-Scalpel Vasectomy’ which is akin to saying keyhole surgery – but says nothing about how the tubes are blocked.

Most guys think that cutting the tubes is enough – an idea pervaded by the term ‘snip.’ But you can’t simply cut the tubes because they will almost certainly grow back. Let’s introduce the vasectomy buzz word that separates one vasectomy from another: Occlusion.

Different methods of occlusion are:

Now you know that No-Scalpel Vasectomy is  just the beginning of the story in that there are different ways to block the tubes. Let’s introduce open and closed vasectomy. 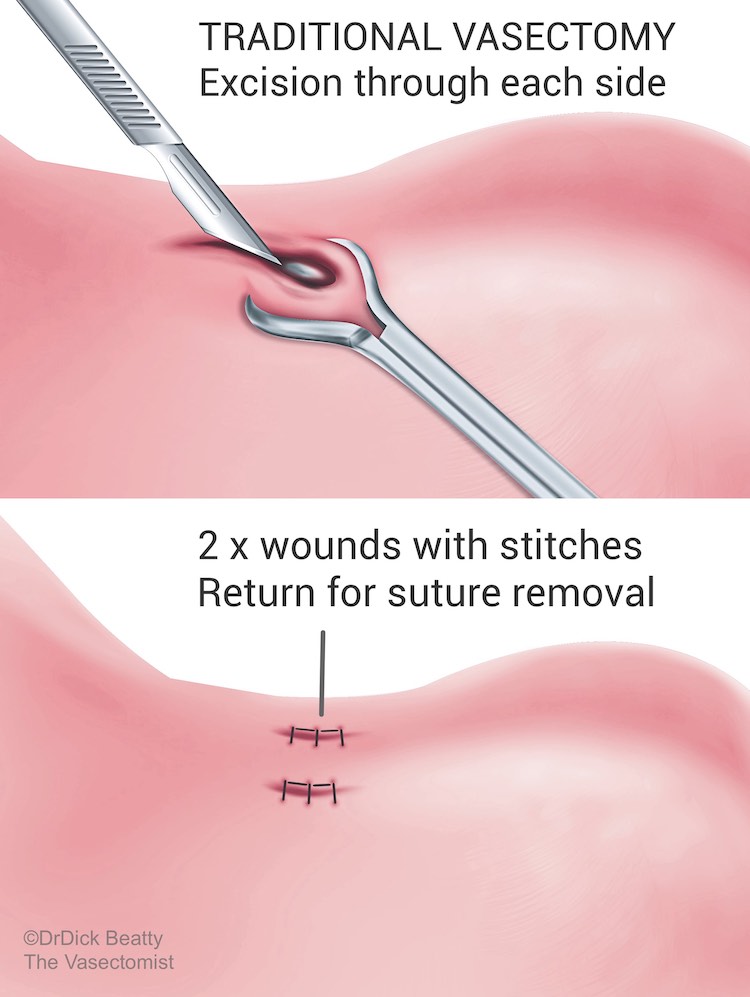 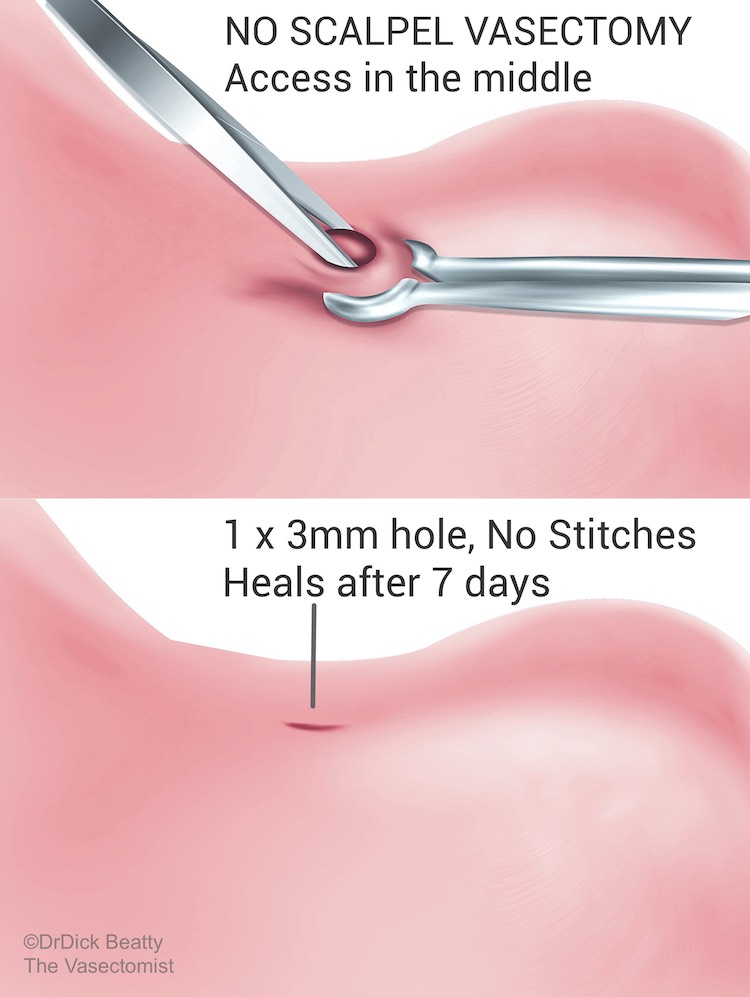 You now understand that ‘no-scalpel vasectomy’ simply means the doctor has deftly got to the tubes. What next? Do you block the upper end, the lower end, or both? This is where things get a little convoluted.

Strangely enough, remove a segment of each vas is not effective because the two ends will simply re-attach. Dr ‘Dick’ Beatty gets out the whiteboard with two scenarios:

Both ends are occluded

Closed Vasectomy results from blocking the lower end, potentially causing ‘blue balls’ from an increase in backpressure.  You can’t just cauterise one end and leave the other open, or the tubes have a 10% risk of growing back. Closed vasectomy therefore requires both the upper and the lower end to be occluded – typically with electrocautery.

The concern with closed vasectomy is that the sperm have ‘nowhere to go’ and may lead to discomfort caused by congestion.

The lower end is left open

Open Vasectomy describes the scenario where only the upper end is occluded. In other words, The lower end is left alone so that sperm are free to swim upstream from the testicle through the open end.

Open-ended vasectomy is considered to be the gold standard method of occluding the vas deferens.

You may think that open vasectomy is quicker than closed vasectomy. Wrong! You can’t just cauterise the upper end and be done, because there would be a 10% failure rate. What else can you do to the upper end to ensure the vasectomy works?  The answer is Fascial Interposition.

Fascial Interposition (FI)  is regarded by leadings Vasectomists as the gold standard vasectomy technique. Why? Because FI is the technique that allows the vasectomy to be open-ended.

The vas deferens has a thin slippery outer structure called fascia, likened to the outer layer of a sausage. The fascia is gently pulled over the ‘stump’ of the vas and secured in place with a titanium clip or suture (The author uses absorbable suture). Unlike cautery, FI is such an effective method of occlusion that it only needs to be performed on one end.

FI to the upper end allows for an open-ended vasectomy, reducing post-procedure discomfort. The theory goes that sperm swim out of the lower tube after an open vasectomy. An experiment in rats demonstrated that the tubes that are left open do in fact seal themselves closed within a few weeks of a vasectomy. However, closure would certainly be slower than the abrupt surgical closure of a closed vasectomy.

Research comparing open to closed vasectomy suggest that open vasectomy does indeed result in less post-vasectomy discomfort. However, research is not 100% conclusive which explains why vasectomy guidelines do not (yet) categorically state that open-ended is better than closed vasectomy. Closed Vasectomy is typically performed in The UK, whilst open vasectomy is more likely to be performed in The US, Canada and Australia. Doctors are trained by vasectomists using the method they were trained in.

Open Vasectomy (AKA Fascial Interposition) also improves the success rate of vasectomy while cautery to both the upper and lower ends is more likely to fail – particularly if the use of cautery is minimised. Aggressive cautery is more difficult to reverse and take longer to heal than open vasectomy.

Vasectomists who have performed both open and closed vasectomy will generally continue with open vasectomy and attest to extremely low failure rates.