Vasectomy is a minor surgical procedure that blocks the vas deferens – about two thirds of the way from the upper pole of the testicle to the base of the penis. There are two Vas Deferens, or tubes, each carrying sperm from the testicles to the ejaculatory ducts under the bladder where the sperm mixes with semen. Sperm are therefore prevented from getting into semen, and are absorbed back into the body.

Semen is still ejaculated after vasectomy because semen is made by the prostate gland and seminal vesicle glands under the bladder. The only difference is that sperm don’t get into semen after vasectomy. Sperm are produced by the testicles but contribute only 2% of the volume of semen. The purpose of sperm is to fertilise an egg, whilst semen nourishes and provides a transport medium for the sperm.

Success is confirmed with a semen test approximately 25 ejaculations and 12-14 week later when the semen is clear of sperm. Sex and ejaculation feel the same but pregnancy is prevented. The chance of a pregnancy ever occurring after a negative post vasectomy test is exceptionally low at 1 in 2,000. HOW IS VASECTOMY PERFORMED?

Vasectomy requires that both vas deferens, or tubes, are divided and blocked, but first you need to get to them.

Traditional vasectomy accesses the tubes via a separate scalpel-incision, leaving a wound requiring stitches on each side of the scrotum.

On the other hand,  No-Scalpel method accesses both tubes through a single small hole in the middle of the scrotum. Most vasectomies these days are No-Scalpel Vasectomy which is performed whilst awake using local anaesthetic.

The tubes are subsequently cut and blocked (or the other way around) in a number of different ways. Which part of the tube is blocked? Occlusion of the lower end – the end attached to the testicle – defines closed vasectomy. Occlusion of the upper end – leaving the lower end left open – describes open vasectomy. Open-ended vasectomy using a titanium clip or suture is becoming the norm. Suture is more technically challenging but obviates the need to leave titanium behind. Read more about the technique of no-scalpel vasectomy.

The following flow diagram leads you to the gold standard technique of No-Scalpel vasectomy with fascial interposition. Follow through to 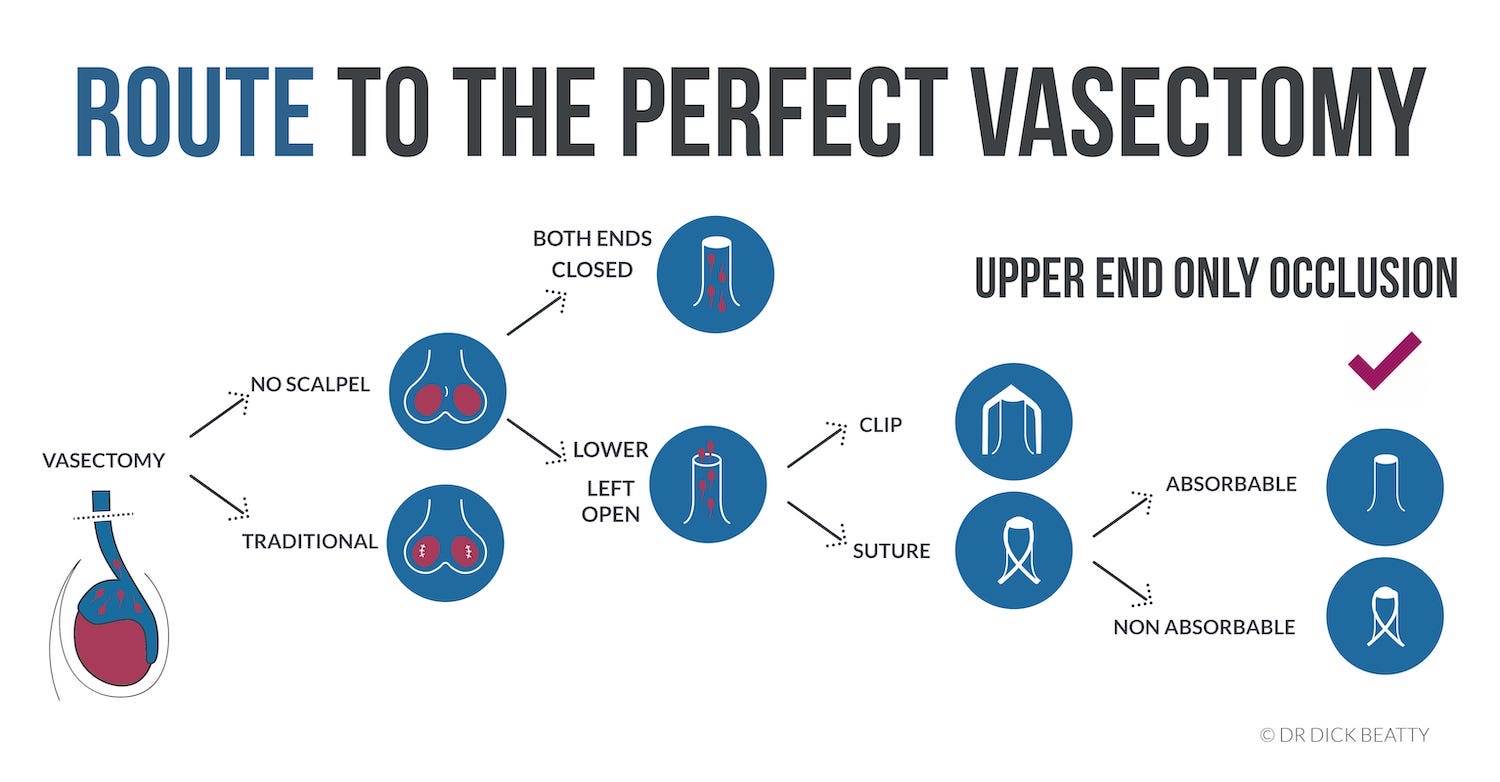 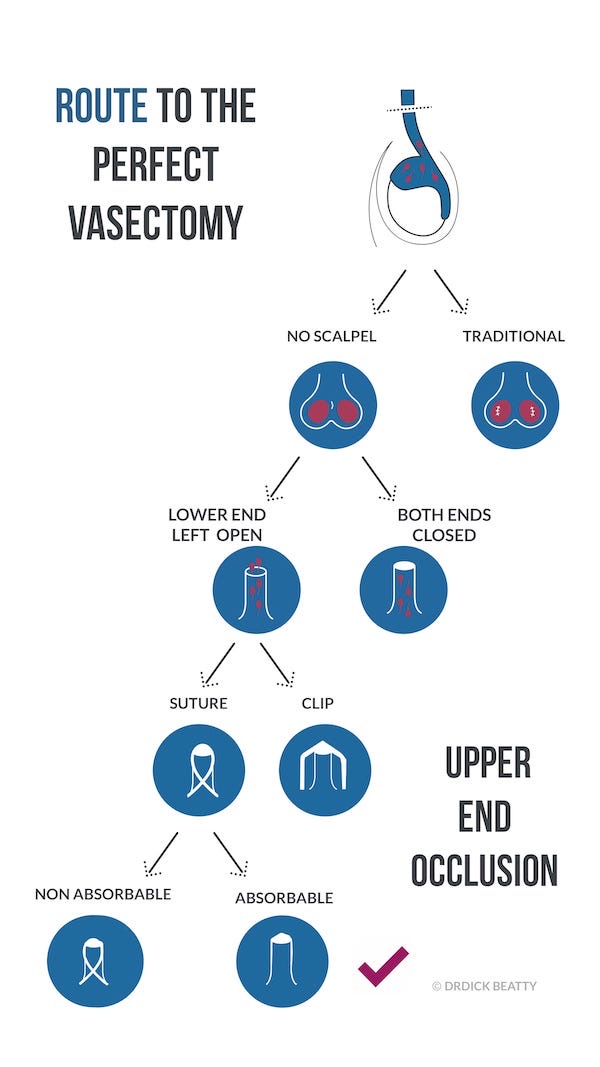 WHY GET A VASECTOMY?

How do you play ball with your partner who drops the hint that she is ‘over hormones?’ How do you handle the bombshell ‘Honey, I’m pregnant!’ Men are not used to grabbing a front-row seat in the contraception department. ‘No worries, mate, she’ll be right’ doesn’t work for contraception.

The top ‘six’ reasons why vasectomy is chosen above other forms of contraception are:

Ultimately, it’s about setting family size rather than leaving it to chance. 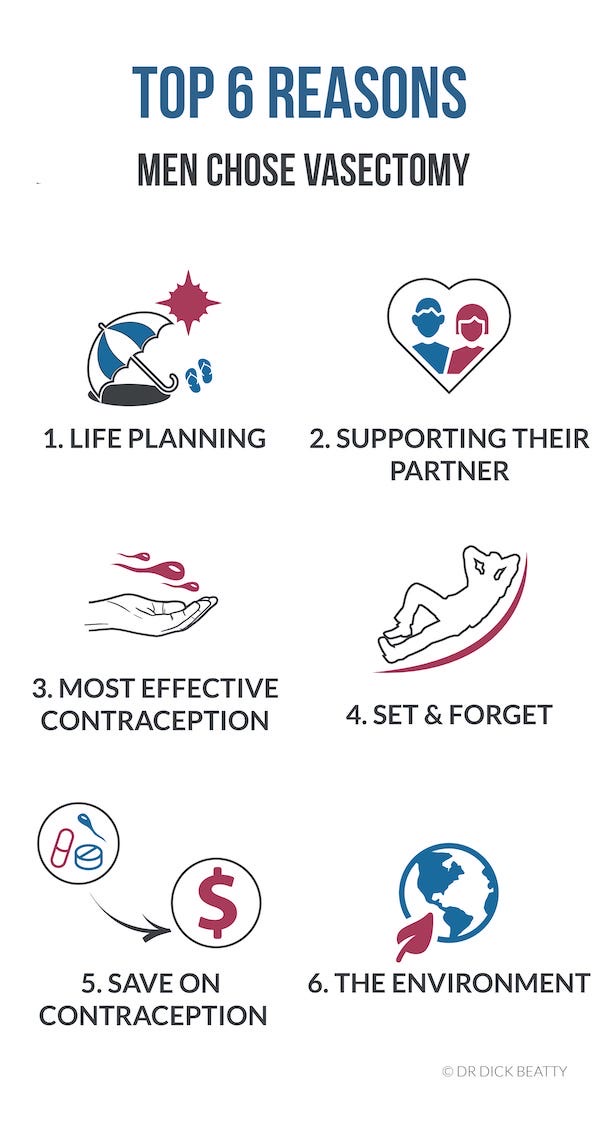 Jump to the infographic if you prefer a visual 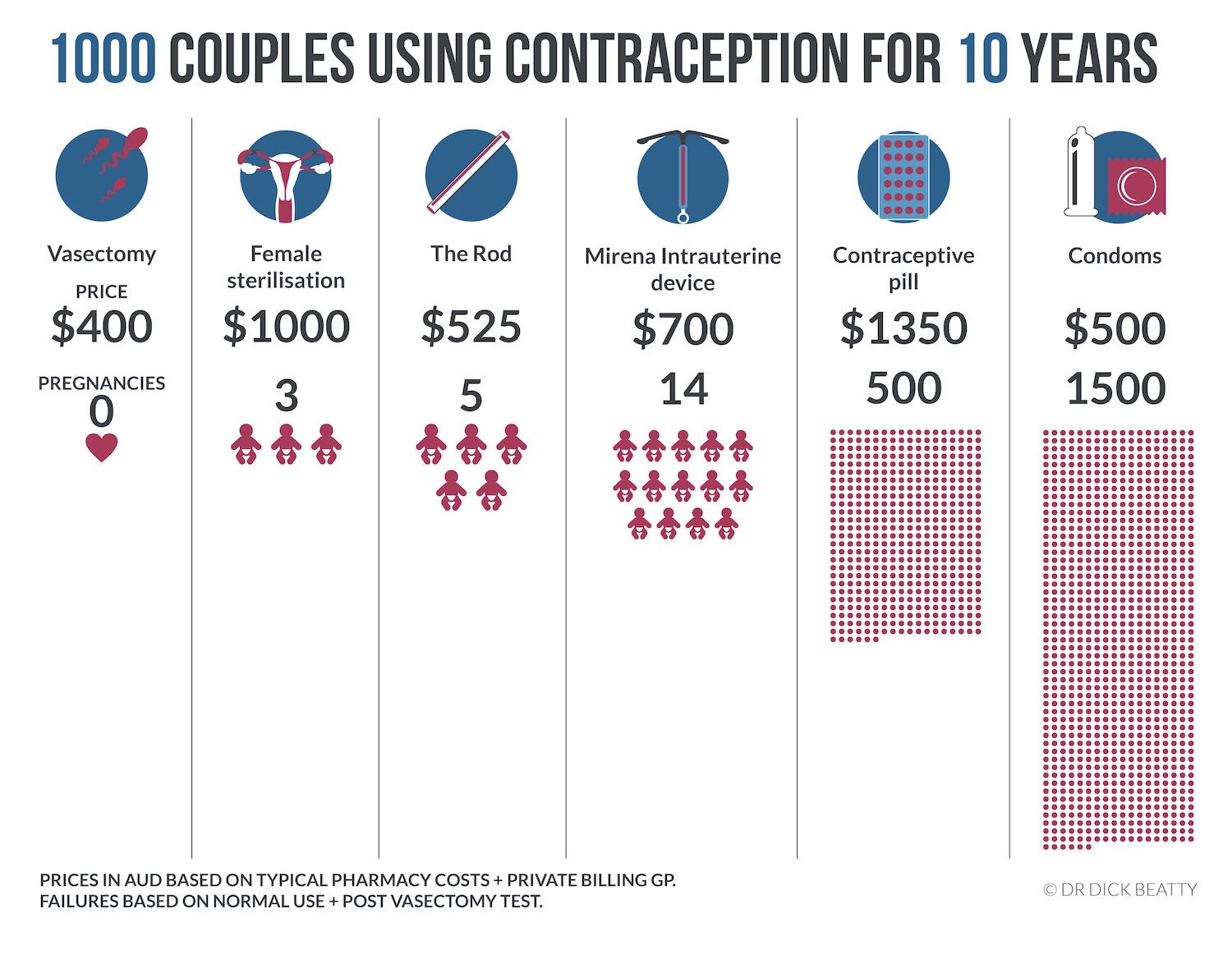 HOW SUCCESSFUL IS VASECTOMY?

Men often say to us that they want to ‘tick that box’ to prevent any future pregnancy.

The vas deferens (tube) does rarely re-join (recanalisation). The first three months is the most common time for recanalisation.

You must get a post-vasectomy semen test to get the all-clear.

The failure rate should be under 1%.

The Vasectomist’s rate of vasectomy failure is around 1 in 500 test results.

Late Failure refers to a pregnancy after getting the all clear from the post vasectomy sample. Thankfully, this is rare at less than 1 in 2,000. Vasectomy ‘failure rate’ describes the lifelong risk of pregnancy whereas the failure rate of other methods of contraception are quoted over a 12 month period. Vasectomy is remarkably effective.

Get the post-vasectomy semen test done, and in the unlikely event of a failure then something can be done about it.

The saying ‘A stitch in time saves nine’ has a certain ring to it when you think of traditional vasectomy!

WHAT ARE THE POSSIBLE SIDE EFFECTS?

Vasectomy can, like any medical procedure, have side effects. Risks are minimised by minimally invasive vasectomy, and are unlikely to change your decision to have the procedure.

Bleeding. A little pin-point bleeding from the skin may occur after the procedure which can be stopped by pinching the skin together firmly for 15 minutes. Post-Vasectomy Haematoma describes internal bleeding that is sufficient to lead to scrotal pain and swelling. The Vasectomist’s rate of serious haematoma is less than 1 in 300. Haematoma will eventually go away on its own, although a large haematoma may take several months to resolve.

Reduce strenuous activity after the procedure to reduce the risk of haematoma.

Infection. The Vasectomist’s rate of infection is less than 1 in 300

Pain. The procedure itself is basically painless thanks to the advent of No-Scalpel Vasectomy and Anaesthesia using The very finest needle available.

Post Vasectomy Pain. Post Vasectomy Pain (PVP) Syndrome is defined as discomfort occurring three months after the procedure that is sufficient to interfere with quality of life, and occurs in approximately 1-2% of men. However, only a small number of men with PVP will require a further procedure. Approximately 1 in 1000 men who have had a vasectomy require an operation for post-vasectomy pain.

The author explains to all his patients that PVP at three months occurs in around 1% of his patients. Chronic pain after vasectomy is a rare but recognised side effect. Over half of Australian men get vasectomy, yet you’re unlikely to hear about long term PVP from any of your mates who have had it done.

A small minority of men read very extensively about post-vasectomy pain syndrome prior to their procedure. This is sure to increase anxiety and can make any niggle afterwards seem like impending doom. There is a general correlation between chronic pain and anxiety to the point that the science is overwhelming. The pain is certainly not in the guy’s head. However, excessive anxiety has the potential to excite the pain pathways as well as making any post-operative pain more difficult to live with.
Therefore, men who are excessively anxious about the possibility of PSVP prior to the procedure should re-consider all options. After all, you either accept the small risk or don’t get a vasectomy.
Prostate Cancer

There was some media concern in 2013 that vasectomy may slightly increase the risk of prostate cancer.  The American Association of Urology have provided a reassuring statement in 2014 following a detailed analysis. They state that ‘vasectomy is not a risk factor for prostate cancer or for high-grade prostate cancer. It is not necessary for physicians to routinely discuss prostate cancer in their preoperative counselling of vasectomy patients.’

Around 2% of men who have had a vasectomy seek a reversal within 10 years of the procedure‎.

So let’s put this in perspective – the vast majority of guys who have a vasectomy will not regret it afterwards.

However, some guys are at greater risk of changing their minds later, and the risk factors are:

Couples with babies might want to defer a vasectomy until their baby is >6 months of age. The Doctor will gently raise the risk of Sudden Infant Death Syndrome (SIDS) for men with young babies. The risk of SIDS or ‘cot death’ is around 1 in 2000 babies. The time of maximum risk occurs between the age of 2 and 4 months of age.

90% of men who get a vasectomy have fathered biologically, but can a man who has not fathered get a vasectomy? Whilst good for the planet, the decision needs to be right for you in the long run. Men in their 20’s are best having a non-judgmental chat with the vasectomy doctor about their options. The outcome from this consultation may be:

The vasectomist approaches vasectomy in young men who have not fathered by balancing:

How Does a Vasectomist approach a 24 year man who has not fathered a child? The fact is undeniable that a very significant percentage of younger men without kids will ask for a reversal later, so you will be asked to accept that. A younger man who says that ‘I know I will (100%) never want kids’ isn’t acknowledging that they might change their mind as they get older, whereas the man who says that  ‘I know there is a chance that I may change my mind later, but I still want to get a vasectomy’ is acknowledging uncertainty in life.

Pushing this further, ask 100 middle-aged adults whether a 24 year old male without kids should be able to get a vasectomy, and you’ll probably find 90% would say ‘no’ (more strongly than that), so there comes a point when an age is simply too young. Do not underestimate how brain development, maturity and life does change you as a person – just ask any 40 year old man what they were like when they were 24. That’s a 16 year age difference,  so you might ask a 24 year old man what they were like were were 8 years old – perhaps a little unfair but does make the point.

What’s the worst thing that can happen if you turn up for a vasectomy but are not quite ready for it?  Just come back in a few months to confirm your decision!

CAN VASECTOMY BE REVERSED?

Vasectomy can be reversed although reversal is expensive and may not work.

See your doctor for a referral to a urologist who performs vasectomy reversals. Most capital cities have a few urologists who perform reversals, with perhaps 2 to 3 who perform most of them.

You will want to research the success rate of the reversal specialists in your area. A 2021 study of 107 reversal providers in the USA found that ‘ Only one provider provided complete information as defined by REVERSAL score of 12, with the majority (61.7%) of providers achieving score ≤6.’ They concluded that ‘There is significant lack of transparency in publicly available information from VR practices.’

The total price for vasectomy reversal is typically in the order of $10,000 AUD with a medicare rebate of under $1,000. Private health cover can reduce out of pocket expenses by several thousand dollars. The ‘out of pocket’ for a reversal may be as low as $3,000.

Consider a vasectomy when you are certain that you do not wish to father any or any more children.

However, some men consider sperm banking prior to vasectomy as a form of insurance against unknown unknowns.

The costs of sperm banking is approximately $600 for the initial banking, and $500 per year for freezing.

A referral from your GP may help to reduce the costs of the service.

Men rarely want to pay thousands of dollars over a 10 year period banking their sperm ‘just in case.’ What risk are you prepared to accept? What price would you pay for certainty? Younger men who have not fathered should consider putting off the vasectomy. However, a young man who is determined to get a vasectomy should certainly consider sperm banking because the risk of regret is so high.

Tests prior to sperm banking will generally include a semen analysis and blood tests. The precise blood tests required vary between providers, and include: